A cheery tale of murder for your Advent

Eldest wanted to make a Christmas decoration; I already had my eye on Monica's pin of a felt mistletoe ball.

But with the child off school and both of us overdosing on television, it seemed lax to just make a ball and leave it at that. Surely we should be learning something about mistletoe, and why we kiss under it at Christmas? A quick Google later, and we were up to our ears in Norse myths. And there's nothing I like more than a good myth.

So. Balder - son of Odin and Frigg - is loved by everyone. The god of light and beauty, his face glows; he is handsome, gentle and wise. But he's troubled by dreams of his death - so Odin sets out on his eight-legged horse (as you do) and meets with a seeress. The news is not good - there is no avoiding Balder's fate.

So Frigg stomps off (there is no evidence in the books we have looked in to suggest she's a heavy-footed woman, but we went so far as to assume a degree of Purposeful Striding) and asks every harmful thing - fire, rocks, plants, birds, diseases, etc - to promise not to hurt Balder in the hope that the nightmares won't come true.

And now Balder is fantastic fun for everyone. The gods come up with an hilarious new game - chucking stuff at Balder and watching it bounce off! He can't be harmed!

But Loki finds out about the mistletoe. And being a proper troublemaker, he makes an arrow out of it and seeks out Balder's blind brother, Hod, to see if he wants to join in the game of Throw Stuff at The Invincible God. Loki guides Hod's arm, and Balder dies.

The only thing that can bring Balder back from death is that every living thing weeps for him. And every thing does weep - with one important exception: Loki. He's fled, and is pretending to be a giantess in a forest, but s/he Will Not Weep.

(I found suggestions on the internet that Frigga wept big fat tears which turned into the white berries of the mistletoe and thus brought Balder back, but the books say Nordic texts make no mention of a resurrection. Faced with a choice between trusting the web and the printed word, I will always come down on the side of the books.)

It doesn't end well for Loki, who ends up tied to some rocks in a cave with a snake dripping venom on his head. Balder's death, meanwhile, means the coming of the end of the world, when the Earth will sink into the sea and men will kill their own fathers and brothers.

(You're probably feeling a bit resentful now. You did, after all, join us for a blog post about felt decorations and kissing.)

You may also be complaining to yourself that none of this stuff goes any way towards answering the question of why we kiss under the mistletoe at Christmas. I seem to remember there was something about Pagans and Druids, but the thing is, we were far too interested in the Norse myths to get distracted by the small matter of the reason we were looking at them in the first place. Look, you're all pretty internet-savvy. You know where Google is.

Also, we made a felt ball. 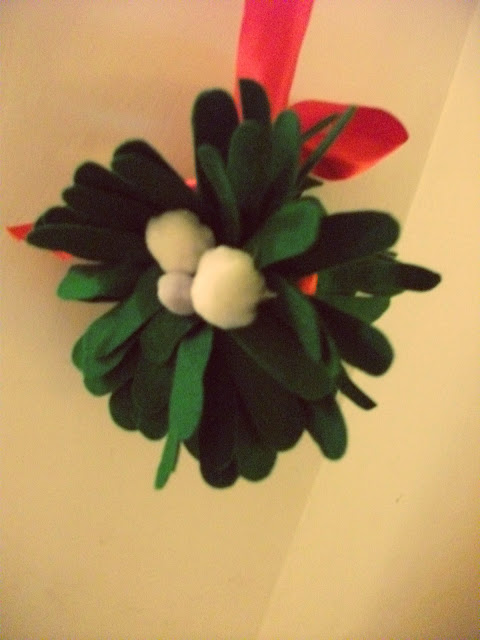 Email ThisBlogThis!Share to TwitterShare to FacebookShare to Pinterest
Labels: the Wife of Bath posts